Skip to content
All the Information – All the Time

All the Information – All the Time 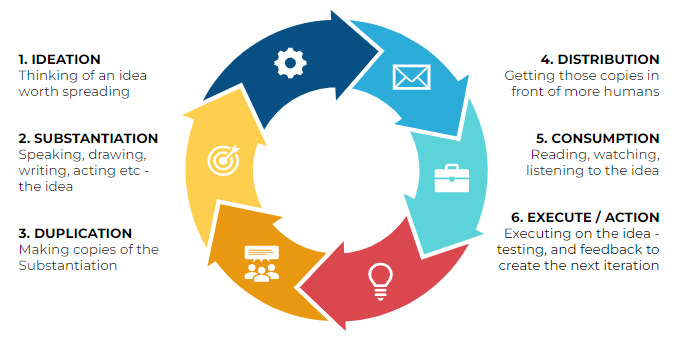 I read recently that since the dawn of time, humans have always benefited from having more information. Stuff like “there’s a woolly mammoth in that cave” and “don’t forget your hat or you’ll freeze to death” – it used to save lives.

This all changed in 2006 (no idea who came up with that date, or how), when we flipped to having too much information, so the problem became all about filtering or screening, and not just unlimited blind consumption. So let’s look at how information gets from human to human.

Information Value Chain. It’s made up of:

Ideation – thinking of an idea worth spreading

Duplication – making copies of the substantiation.

Distribution – getting those copies in front of more humans

This is not my concept – it came from https://stratechery.com/2022/the-ai-unbundling/.

Stage 1 – Fully bundled. Back in the day, these all happened at the same time. That’s Cavewoman 1 talking to Caveman 1 or Cave family, if they cared to listen. These are all bundled together – it’s all one big bottleneck.

From this point onwards, making communication more efficient is all about clearing these bottlenecks – or ‘unbundling’ this chain.

Stage 2 – Writing. Some bright soul worked out scratching rocks onto rocks makes a mark. Now you’ve unbundled consumption. You can scribble on cave walls all day for people to consume in their own time. You still can’t duplicate or distribute it.

Stage 3 – Printing. Gutenburg came up with the printing press in 1436, unbundling duplication. You can now get your idea down on paper, and duplicate as many times as you want.

Stage 4 – Internet. The original article refers to a paper-boy, solving the newspaper distribution problem – which is a cleverer example, but let’s stick with the internet which has unbundled distribution. Information can now be distributed everywhere, almost for free.

Stage 5 – ChatGPT. The problem up to now is you still needed these pesky humans to create and substantiate the ideas. These two were still bundled together.

Well, not anymore. As of right now, AI (ChatGPT if you like) can substantiate unlimited content based on simple inputs. It’s fully unbundled. No more bottlenecks. All the information, all the time.

So that’s where we are. But because humans have to do things like ‘ponder’ for a while, and we have things like Google to keep us sane, we don’t see ALL the information yet. But it’s coming. And I don’t think most people have fully contemplated that yet.

So what’s next? A couple of things to think about.

Well, funnily enough, Google has some experience in this space and is trusted 8.5 billion times every day. The solution is probably also the solution devised over 20 years ago – which is all about the attribution (creator) of that content. Page-rank – where information is served up according to the credibility of the source. Google never really cared who came up with the information – only that it’s useful to the user. It’s no different now. Google is not concerned if content is generated by humans or AI, only that it’s useful.

So where does that get us to? You could argue – almost exactly where we are right now. We trust different sources for different types of information.

– Science: maybe a professor, or a university

So it’s all about brands (influencers also = brands). Each brand needs to retain expertise in its chosen topic, and as long as they do that, they will be served up as useful content creators to pay attention to. Of course, many people will still get confused, and trust the wrong sources for the wrong info, but you can only do so much

The above value-chain gets the information from a human to a human, but a lot of information is only useful if it creates an action. Learning and taking action from the idea is still actually a bottleneck.

This gets solved next, and it probably won’t be solved by ChatGPT. It will most likely be another layer created by today’s, or tomorrow’s tech companies. GPT might have consumed pretty much all of the world’s knowledge ever created, and has it stored in its brain, but when it comes to remembering tasks, it’s a 3-year-old. One task at a time.

So the 3rd party apps will be the “action” piece. They will sit on top of GPT and create all of the action items. At first controlled by humans. Later, when the human gets tired, or has a day off, or goes on vacation, it’ll be set to auto-run, and never look back.

– The social-media-creator app will ask you what kind of influencer you want to be. It’ll use the GPT (or other) model to create all the content, and go back and forth with feedback-reaction loops, and it will build in the functionality to post this content to channels, interact with others, reply to comments etc.

– The travel companion app will store all of your preferences and use GPT to create all of your travel plans, itineraries, inspiration etc. It’ll combine with GPS and audio, and it’ll guide you through destinations giving you tips and suggestions, as well as act as a tour guide if you like. Bookings will follow, and will probably look like all those voice-enabled booking engines that were promised 8 years ago (yes, 8 years!). Only this time, they’ll work.

Anyway, there’ll be a huge pile of apps, and the bottlenecks will be gone. The AI will run on its own, aside from the occasional report and manager (you) check-in. Things like “Hey, just letting you know we (we?) got your followers up 43% on IG this week, and we can probably get you up another 93% next week if you want me to record a podcast with Andrew Tate, but that will also earn you 26,945 haters, and there’s a 97% chance you’ll lose all of your clients. Your call. Say Do-It or Stop”

This feedback loop gets better over time, and gets trusted over time. Auto-run becomes the default setting. It’ll run until we say stop. So forever, because we’re only human and we’ll forget to tell it to stop.

That’s what “All of the information, all of the time” is – it’s everything humans know  – collectively, accessible immediately to anybody at any time, which gets fed back into the model to create yet more information – without a human having to do anything. That’s the key – without having to do anything. Without the human bottlenecks to slow things down, the potential here is…?